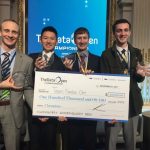 Monday is a dizzying mash of adrenaline-tinted memories. Walking the floors of the New York Stock Exchange, watching old-time traders tell about the bullpen days. Sitting in the palatial elegance of the NYSE Board Room, listening to Ken Griffin share stories of teamwork, risks, and success. And then, in a breath-catching rush, winning the $100,000 Citadel / Correlation One Data Open Championship.

In February, I first saw a flyer tacked up in the hall of the Computer Science building.  “Hi, my name is Soren,” a student introduced himself at the reception that evening, “And I plan to win this.”

Ten months later, we’d not only beaten 400 other Berkeley students, but had also come out ahead of the 20 other finalist teams. Ten thousand students had applied to the Correlation One system, hoping to stand on this podium. Somehow, through perseverance, grit, and luck, we managed to be the ones holding the giant check.

I’ll post later about our approach and what worked well for our team. In the meantime, a few thumbnail sketches of the day:

The oral presentations: Forty minutes of cross-examination by two of Citadel quantitative researchers. Deep-cutting, insightful questions that asked about strategy and methodology. The lead judge’s twinkling eyes and intimidating beard dancing as threw questions at us. The nervous glances exchanged with teammates, trying to decide who should answer- and still finding the seamless teamwork which characterized the rest of the competition. 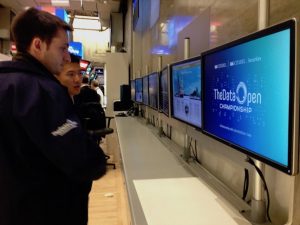 The Stock Exchange Floor: The most surreal part of the day. Looking through thick glass at the 225-year-old Buttonwood Agreement which founded the first securities exchange in the United States. Donning the rough jackets of the floor traders, emblazoned with logos of Citadel and The Data Open. And walking out into a world of dozens of flashing screens, and heavy-set men with thick New York accents griping about life, sports, food, and the market’s foibles. Learning from Rudy Mass, a veteran of 44 years on the stock exchange floor, tell of how he rose from being a 17-year-old high school dropout to becoming Partner at Solomon Brothers to being a Governor at the New York Stock Exchange. 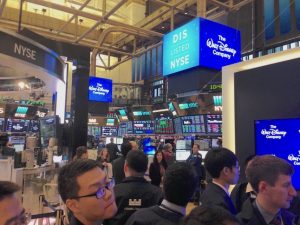 Executive Fireside Chats: Ken Griffin founded Citadel as he graduated college, and grew it into one of the world’s largest hedge funds over twenty-five years– yet never spoke of “I” or “me” but only “the team” and “we” in his 15-minute address. Peng Zhao, who became CEO of Citadel Securities at 34 years old, spoke of the importance of finding opportunities to grow and leverage your skills. Tom Farley, the similarly young President of NYSE, talked about always being open to learning from others but taking big risks to step outside your comfort zone.

The awards: Chatting with other competitors, it was clear that few teams had attempted causal inference, done rigorous hypothesis testing, or been able to weave their explorations into a single strong thesis. And so I crossed my fingers that we would not be named one of the runner-ups: it felt like an all-or nothing. As MIT took 3rd place and Harvard took 2nd, my excitement crept up. And then as James Yeh read a description of the winning team, our certainty rose:

“Before announcing the winner, I’d like to say a few words about the winning team. This team also brought in additional datasets, they selected a challenging but well-defined question that had clear policy impact and was tuned to the data available. To guard against data snooping, they put together a pre-plan research program before even analyzing the data. Several of their conclusions went against their initial assumptions, which led them to ask some really hard and challenging questions about their analysis. This team also really focused on their team dynamics. They even held practice datathon rounds in order to ensure that they would operate as a highly-functioning team – congratulations on that. The judges were impressed by the effort the team put into reviewing existing literature; this is reflected in their final report, which the judges thought was of potentially publishable quality. Please join me in congratulating the winners, and recipients of the one hundred thousand dollar prize- Team #1”

I leapt from my chair with a holler of excitement, high-fiving my teammates. We all wore disbelieving grins, stunned and excited as we bounded up the steps and onto stage, shaking hands with the judges and staring in awe at the trophies and the giant check that stood nearly as wide as our team.  I’ve never stood in front of so many cameras snapping photos from all angles, never stretched my face so wide with a disbelieving grin, and never been so awed by what solid teamwork could do in a few days. Ten months of thinking about it, and the moment was finally there. 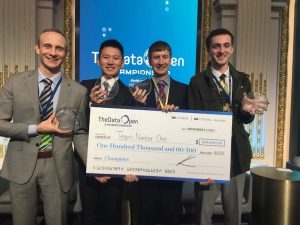 Learning the backstory: Afterwards, the judges told us that our team had amassed such an outstanding lead in the initial round of judging that we “would have had to bomb the presentation” to not take the podium. Thinking back to the hours 60-70 hours that we had each put in over five days, the endless pouring over literature and data visualizations, we knew it had all paid off.  Our team had incredible team dynamics, had supported and pushed each other to give our best for a long sprint, and it had paid off.