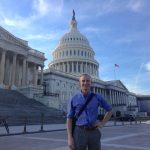 After finishing my qualifying exams, I had just a few days at home before leaving for the East Coast to take part in the Coalition for National Science Funding’s Exhibition Day on Capitol Hill. Part of a contingent with representation from 5 of the University of California campuses, I represented Berkeley’s research community along with Rhonda Schrader (Entrepreneurship program manager and I-Corps node coordinator) and Michelle Moskowitz (Regulatory Affairs) in two days of meetings with legislators.

Michelle packed our schedule with 18 meetings in two days- giving me an opportunity to present current UC Berkeley research to a wide audience, but also giving me an incredible insight into the legislative process. Rushing between meetings with legislative staffers and representatives, “lobbying” suddenly turned from a politicized new term to a concrete activity with a goal and process. 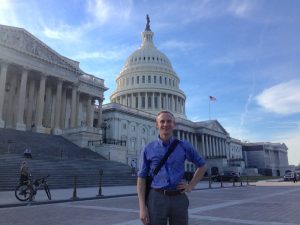 Exhausted and exhilarated after 18 meetings in 2 days

Most of our meetings were with legislative aides, the army of staffers who interface between constituents and representatives. Instead of finding an army of dour old bureaucrats, I discovered that the bulk of the policy machine was made of fresh college graduates, working long hours to meet with constituents and pull together policy positions at the heart of American democracy. While I’m most comfortable working with data and studying big questions in detail, I came to appreciate the Political Science graduates who love working with constituents and getting an overview of the full scope of problems confronting the citizenry. The pace of the work is exhausting- meeting with dozens of constituents each day, then working late hours to pull together information for the representatives- but the environment exhilarating. 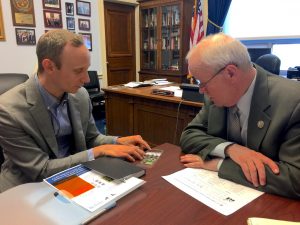 Demonstrating our energy-harvesting device to Jerry McNerney, a former cleantech entrepreneur and current Representative for the Pleasanton-Stockton area.

We also met with committee staffers on the House Science Committee, specialists with PhDs and domain expertise who found that their lab jobs weren’t fulfilling enough and set out to inform policy on the Hill. Rather than spinning through the revolving door into lobbying, these career staffers were passionate about science and technology, incredibly well-informed about current issues in the field, and shared my academic desire to find solid, robust answers to challenging problems.

At the heart of the machine are the Representatives and Senators themselves, the public servants who forfeit personal life for a full schedule of  meeting constituents, attending events, maintaining relationships, and struggling to stay on top of policy developments. Michelle’s hard work was rewarded with face-to-face meetings in their legislative offices, as well as a few exhilarating photo ops in the Capitol building as Representatives rushed to cast their votes. I learned of the little golden lapel pins which distinguish Congresspeople from constituents, and caught a bit of celebrity fever with sightings of Elizabeth Warren, Barbara Feinstein, and (I swear) Rex Tillerson. 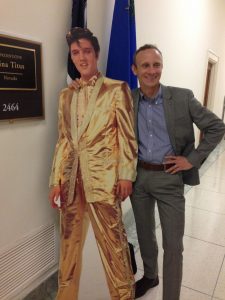 The most important person on Capitol Hill

While many of our meetings were with Democrats who were already friendly to generous science funding, we had some fruitful conversations with Republicans from California and beyond who wanted to ensure that taxpayer funds were being used wisely and sparingly. These meetings helped me humanize the perspectives of the Republican bloc, and I was excited to discover a common desire to maximize the benefits of science funding. The I-Corps program was a key talking point here, as a demonstration of a small investment that facilitates the commercialization of research discoveries.

It was an incredible experience to walk the halls of the congressional buildings, and realize that my interests were just as important as the other groups of lobbyists we bumped into -including representatives from the medical cannabis industry, ALS patients, realtors, and pro-Israel Jews. If you have a chance to go to DC and peer into the heart of the political beast, I’d encourage you to do so.

Quick photo shoot in the Capitol with Jackie Speier (in red), representing the San Mateo area.